Get Back in the Groove

Returning from vacation and getting back into a work routine can be challenging. Here are some tried and true ideas that help you get back in the groove faster: Re-start your morning rituals --the familiar, seamless routines that set the tone for a productive work...

END_OF_DOCUMENT_TOKEN_TO_BE_REPLACED

Len wants to leave his job to start his own design studio. As Len smartly assesses his entrepreneurial readiness, he wants to rid himself of one habit that could doom his startup -- perfectionism. Mark Cuban of the TV series Shark Tank said, “Perfectionism is the...

END_OF_DOCUMENT_TOKEN_TO_BE_REPLACED

Motivate Your Employees to Their Full Potential

Once you’ve hired your “A” team members, how can you keep them engaged and working to their full potential? Even if benefits and raises were available, they can’t be the solution. As one VC told me, “There are many factors that contribute to an employee’s desire to...

END_OF_DOCUMENT_TOKEN_TO_BE_REPLACED

You believe in your mission wholeheartedly.  As a founder, you are fired up to work hard every day. And when funds are tight and resources are limited, or when a crisis like COVID erupts, you need employees to do their best work. Based on the numerous requests I...

END_OF_DOCUMENT_TOKEN_TO_BE_REPLACED

Emotional self-regulation is an essential core skill for a founder. When challenges mount up, vulnerabilities are unveiled that could sabotage your ability to make good decisions, listen mindfully and get back on track. For the sake of your startup, know the options...

END_OF_DOCUMENT_TOKEN_TO_BE_REPLACED

About this time of year is when good intentions for building a new habit start to fade. Check with your local health club, if you doubt me. Research from University College London concluded that the median amount of time necessary to build a new habit takes 66 consecutive days!

Hopefully, you are still going strong towards your 2022 Resolution. Do you have a back-up plan for if and when the habit formation process is challenged?

For example, if your goal is to work out first thing every morning, having your workout clothes at the foot of your bed makes it easy to get up and jump on the tread mill. But what happens to your habit-building streak if one morning the dog runs off with your shorts, or if the treadmill breaks down? Those interruptions can allow all sorts of distractions to deter you from your workout and weaken your resolve.

Just like in business, have a Plan B and Plan C to stay on track – an extra pair of shorts on the nightstand, or a substitute series of aerobic exercises. Habit-building is an endurance test, so make the process easier with a back-up plan.

Need help in devising and sticking to a habit-forming plan? Contact me at [email protected]

A New View on Sleep

Do you see sleep as an inconvenience, a waste of time, being lazy? I did too! I admire folks who perform at their peak with only 3-4 hours sleep. Towards that end, but to no avail, I meditated, took Chi Gong classes, and listened to Jocko.

Alas, there was no disputing the awesome effects of good sleep on my well-being and performance. After a deeper dive into studying sleep and how it affects brain function, I was all in — 8-9 hours is A-ok with me.

Even now, armed with enough data to challenge my sleep resistant clients, it’s still tough to convince them that sleep is not a tyrant or something you do on the weekends.  What has been more effective was my suggestion to regard sleep as something their business absolutely cannot do without. The responses included:

With that new view of sleep, they are more willing to optimize their sleep by:

Want to learn more about how to fortify the core elements of successful entrepreneurs? Contact me at [email protected]

Take a Time Out to Listen

As a kid, I loved hearing John Madden’s bellowing voice on Sunday Night Football. I knew nothing about the sport, but Madden’s infectious enthusiasm had a way of making me put down my homework and run downstairs to the TV room to see what was so hilarious or outrageous about a fumble at the 40 yard line!

During the pre and post game shows, I had no idea what plays or strategies he was talking about, but his exuberant love for the game and devotion for his players was well known. Following his passing this week, it was interesting to read about some of the life lessons he taught his players. Present and future business leaders can appreciate one lesson in particular.

Kroeger adds “This is true for business leaders such as myself as well as other roles in life like being a parent. It is difficult to pay attention to things we don’t want to hear, but it is absolutely essential in today’s volatile, uncertain, complex and ambiguous [world].”

Your takeaway: What opinions or criticisms are you avoiding? What important, but contrary information are you shutting out because it doesn’t fit your narrative? Listening in a mindful way doesn’t mean having to agree with what you don’t want to hear. It means considering all perspectives and all the facts when making critical life and business decisions.

Make mindful listening your goal in 2022. For how to do this, contact me at [email protected]

Happy Holidays to All!   As we, the COREageous, prepare for 2022, let’s deter the scourge of many a startup – a founder’s unfounded self-doubt. Here are four ways to show self-doubt the door:

Get COREageous in 2022! Your ability to manage self-doubt is core to your success. Need help? Contact me at [email protected] 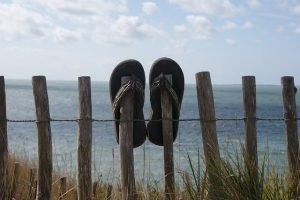 Perhaps it’s the end of the year, the anticipation of the New Year, distraction or something, but a complaint that frequently crops up in coaching these days is: trouble making decisions.

How you feel about a decision should, no doubt, be recognized. But, at some point, when our emotions start to gum up the decision-making process, we need to revert back to thinking mode. The wide range of emotions cloud the process and extend the time it takes to make a well “thought out” decision.

Damon, an owner of a health food startup, was faced with the dilemma of letting a talented, well-liked, but defiant employee go. He cited several concerns that put him in a state of decision-making paralysis. Once he made a decision, he realized other factors he had forgotten and retracted the decision. The constant flip-flopping made him question his competence as a leader, affected his sleep and added to his distractibility. After a couple weeks of woeful waffling, we took the step of putting the pros and cons on paper.

Not only an aid to working memory (the ability to hold several factors online in your head while you make a decision), writing down the pros and cons helped distance Damon from the emotional upheaval. If you’re on the fence, good ole “putting pen to paper” brings a decision-making process into better focus.

Hampered by distraction? Trouble keeping your focus under stress? CoreCoaching can help. Contact me at [email protected]